Take a trip to the centre of Umbria at its most authentic, through unspoiled countryside dotted with Italy’s most picturesque towns and villages.

Set off from the rural hamlet of Agriturismo Borgo Spante and cross hills, vineyards and woods to discover a world of small villages, strongholds and castles between the fortified cities of Todi, Orvieto and Citta` di Castello. 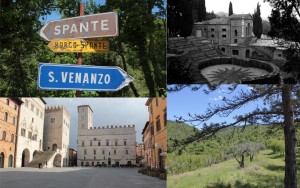 On the tracks of the ancient via Romea northwards, towards Toscana, you will come across Parrano, with its small historical centre and the impressive Forra di Parrano (Parrano Gorge). Continuing along the route you will find the Tane del Diavolo (Devil’s Lair), a crystal clear torrent of thermal water that, over the centuries, has worn away the rock to form caves and deep canyons. The thermal waters of Parrano Gorge feed the small Thermal Park of Parrano, open from May to September.

Continuing towards Citta` della Pieve, stop at the imposing castle of Montegiove, which has dominated the borders of Umbria and Toscana since the end of 1200 AD. Today the estate produces wine and the producer organises wine tasting and tours of the wine cellars and vineyard.

At Montegiove stop and visit the renowned Scarzuola, the Ideal City built by twentieth century architect and artist Tomaso Buzzi. It is a surreal construction, a route full of symbolism and theatrical and esoteric references, and is built next to a medieval convent founded by Saint Francis.

Passing the castle of Casteldifiori and the medieval walls of Montegabbione, you will come to Citta` della Pieve, hometown of Perugino, one of the most important painters of the Italian Renaissance and Raffaello’s teacher. The cathedral boasts some of Perugino’s frescoes. Citta` della Pieve hosts the famous Palio dei Terzieri, one of Umbria’s best medieval festivals. On a gastronomic note, the city is famous for its saffron dishes!

Crossing the forests of Mount Peglia in an easterly direction, towards the heart of the Tiber valley and the fortified city of Todi, you can admire a spectacular Umbrian panorama of rows of hills dotted with towns and castles.

At San Venanzo, visit Villa Faina – now the town hall, the park and the volcanology museum. Delicacies from Salumeria Norcineria David have been known to travel abroad (vacuum packed) with foreign guests and have reached as far as Great Britain and The Netherlands! The Sella di San Venanzo, prosciutto di Cinta, Capocollo. Pigna del Monte Peglia, typical Umbrian salame and wild boar salame are famous in the area.

Continuing towards Todi you will reach Castello di Collelungo where it is possible to visit Cantine Conti Faina, the old wine cellars of the castle that are still used today in the refining process of the Conti Faina wines.

After Ripalvella you will come to Fratta Todina, once the holiday destination of bishops from Todi, where it is worth visiting Palazzo Altieri and the Eremo Francescano della Spineta (Franciscan hermitage), with its fascinating medieval cloisters.

The last stage before Todi is the picturesque Monte Castello di Vibio, home to the delightful tiny theatre: Teatro della Concordia, the smallest theatre in the world, built on a scale fitting the size of the village. Constructed during the social upheavals following the French Revolution its name is a dedication to the Agreement Between Peoples. The Teatro della Concordia has a total of ninety nine seats and presents a wide and interesting array of shows and concerts throughout the year.

Feel free to ask us if you need help with reservations, finding opening times, to visit the Teatro della Concordia or to organise an excursion to the Devil’s Lair or to book a wine tasting trip. We are happy to help our guests organise a memorable holiday in Umbria, discovering special places off the beaten track.