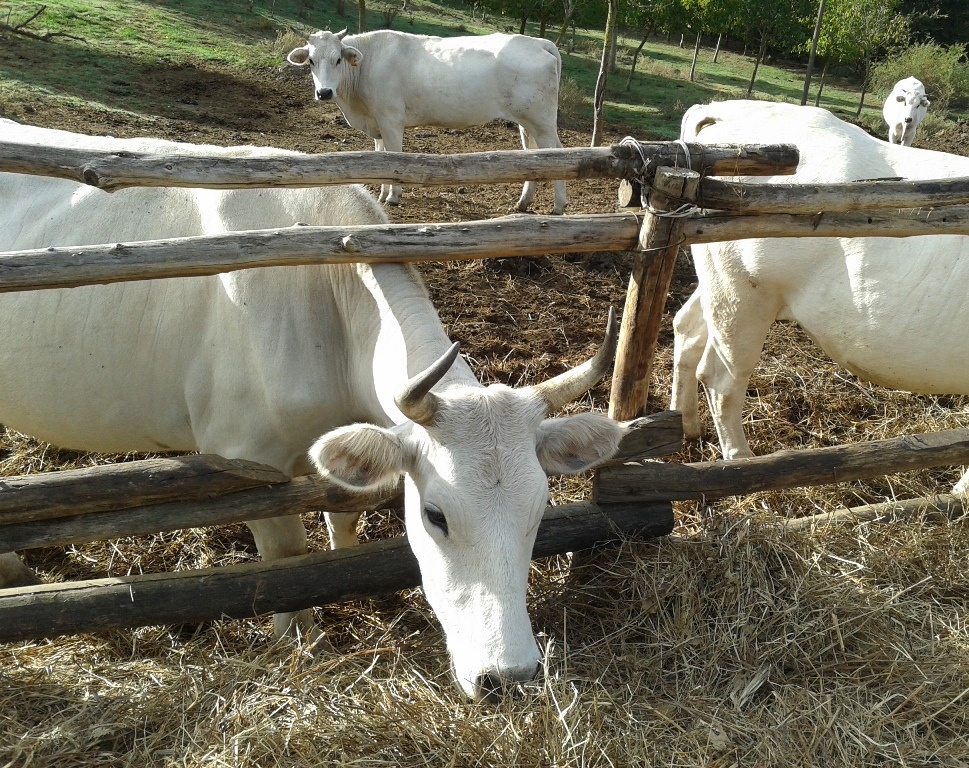 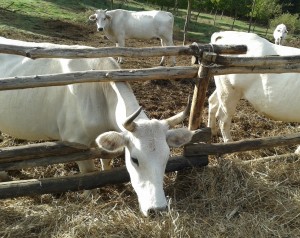 The gorgeous Nisa with her lira horns

A few mornings ago I heard the Bitu’s urgent call, “The calf’s leg is broken!”

I broke into a cold sweat because, for large herbivores, this always means they have to be put down immediately.  As I rushed to the site I thought that fortunately Bitu always exaggerates. Once there I saw a two year old heifer, not a small calf, who is sadly standing on three legs, the back right leg dangling like a chandelier after an earthquake!

I pulled her slowly to the shed and made sure she was safe.

I could not distinguish if my emotions were more of anger or panic.  The images in my head were of all my uncle’s old English prints of an owner or a soldier bidding farewell to an injured horse, or of Spielberg’s ‘War Horse’ which  I had recently seen.  There was always a weapon, a pistol aiming at the animal’s head and the look of a soul burning for the loss of a dear friend.

I started a search of all the veterinarians in the area as I didn’t feel capable of making any decisions myself. But, as anyone who has animals at home knows, trouble always comes on Saturdays and Sundays, Christmas or major holidays…in other words, when a vet is nowhere to be found! 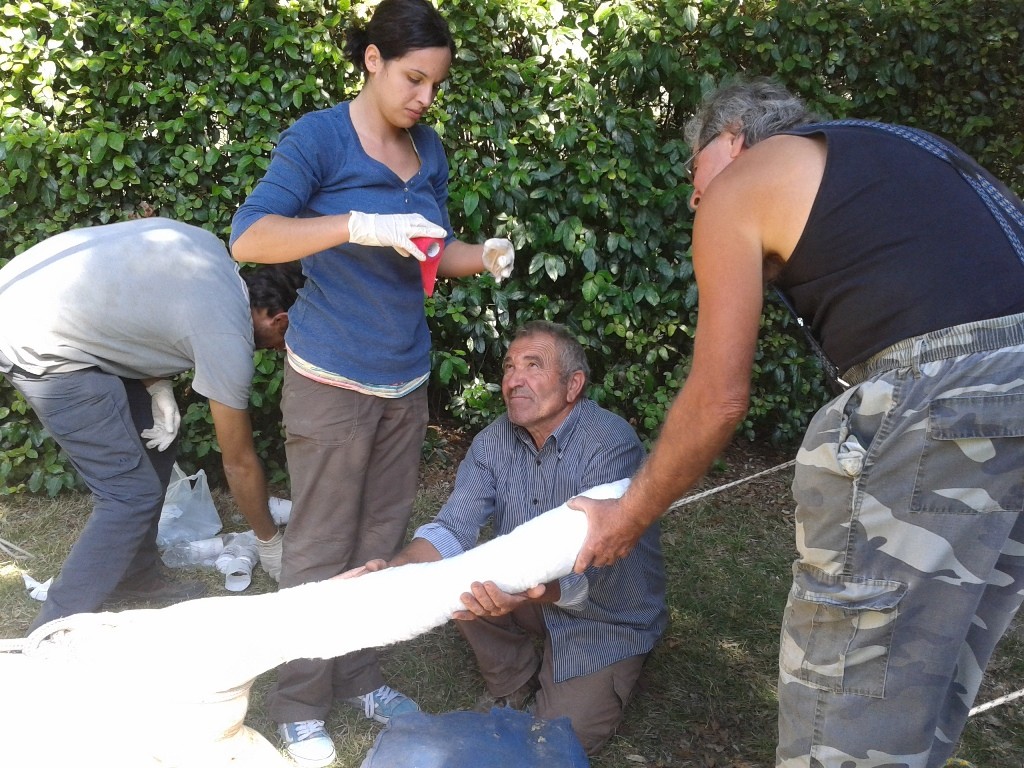 Meanwhile, the young heifer, who I now recognized as Dagda, the great Cybele’s granddaughter, looked at me with an expression of pain and trust. I now felt wild with rage because I didn’t know what to do.

I finally found a vet who told me he could advise nothing without seeing Dagda first (really!), but he’d send a young vet in the meantime and that I should not expect too much…

A young man showed up in the afternoon…The calf had a serious fracture but luckily it was metatarsal, at the top of her hoof and not in the limb. The sensible thing to do would be to bring her to the slaughterhouse which doesn’t even cross my mind, or attempt surgery replacing bone with plates and rods.  The problem is, cattle are very delicate when it comes to bones and tend to be easily infected throughout their skeletal system.

I was finally able to reach my veterinarian, just returned from a relative’s funeral.  She will guarantee nothing but we can try to place a cast on her leg. We decide on good old fashioned plaster and yesterday morning we began the big maneuvers.

Dagda was sedated and moved on a tractor down to the lawn of the Villa where we could work more comfortably there in front of my darkened office.

We start with X-rays to see the state of affairs. The fracture is total and very bad, but I decided to proceed anyway.  Besides the sedation she is now anesthetized, as putting her leg in traction will cause a lot of pain and we could not risk her moving at all.  As we waited for the anesthesia to take effect we all sat on the shady lawn having a strange sort of picnic as we sat between two tractors. Dagda lay in the middle, a needle in her vein as I held her by a horn and caressed her head as the others looked on.

What tool could be better than a tractor to pull her into traction with accuracy…?

Her leg finally held position and after one last check with an X-ray, the vet began placing the cast. She began with layers and layers of good soft padding to prevent scratches over which she placed a splendid corrugated red bandage to surround and support the leg from the hoof to mid thigh. The final phase were four rolls of plaster bandages soaked in hot water which the vet manipulated with a potter’s skill. It stuck to the broken leg with a form that would leave Dagda comfortable and supported. 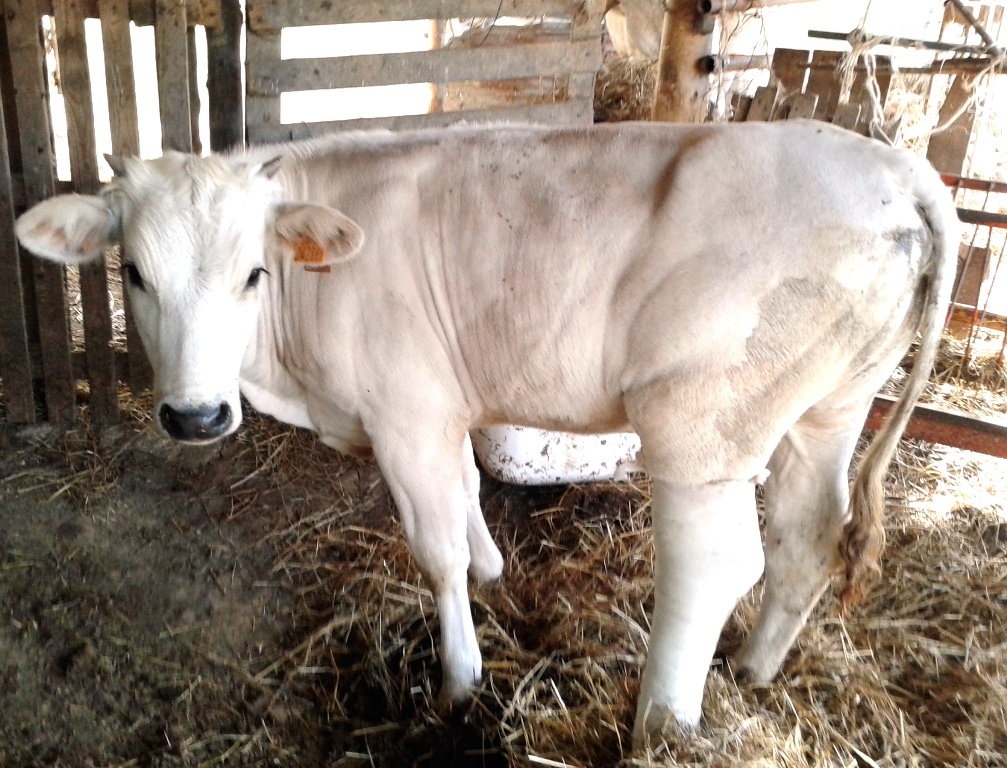 I was assigned to control her breathing and to adjust the anesthetic. It made a serious impression on me as her position and the stress had caused her to swell and I was afraid her belly would explode…But as soon as the plaster had set we moved her to the stable and laid her down semi-conscious on fresh straw!

It was now 4 o’clock in the afternoon and we were all exhausted, but still had to make a trip to Perugia to get the antibiotic to prevent any infection. For the moment I felt satisfied and hopeful…

Within minutes Dagda awoke and looked around with surprise. She got to her feet, but the leg was stretched out and she didn’t know how to find her balance. The swelling magically began to disappear as she got hungry and tucked in to eat the hay making noisy puffing sounds.