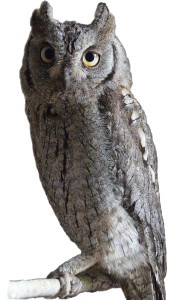 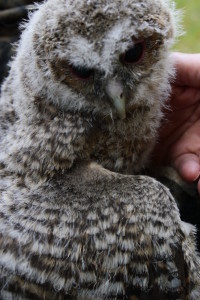 Noli me tangere – Don’t touch me 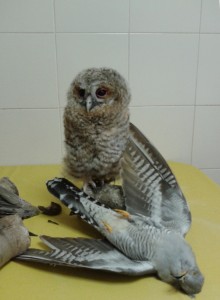 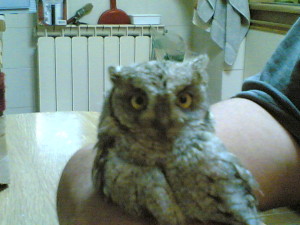 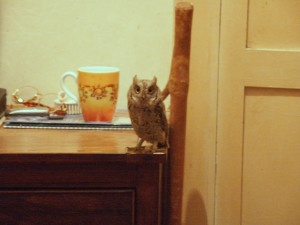 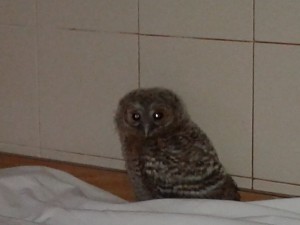 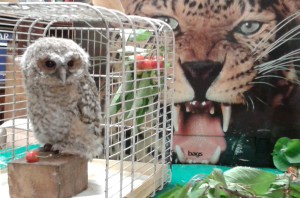 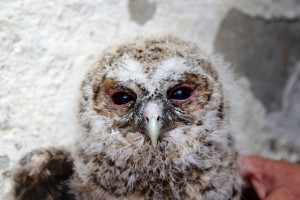 She sought shelter where she could: huddled on the dried  branch  of an olive tree which was leaning against the bell tower. And behold, after 10 years, history repeats itself. But she does not have Clodoveo’s yellow eyes,  his wild spirit and his lightning swift  movements. Covered with white down, she seems to have fallen from a cloud and has two black, intense and very gentle eyes. She has no family, no name but is very hungry.

There is fresh liver in the fridge and to form the fibrous casing   around it,  the fine hairs from Daphne’s soft coat will do very nicely. And so, in this way, my hands recover the ability to prepare  the tiny morsels of the right size and the infinite patience needed to feed them to her…

For now, she can stay in Clodoveo’s little cage  even if, unfledged, it is too big for her.  She has terrible claws which she never uses, and as the days go by,, I discover that she likes to be stroked with a wing feather; she smacks her beak in greeting and purrs like a cat when one strokes her  at the junction of her wings. Suddenly,  in a way that is both abundant and  unusual, even her food rains down from Heaven for her. A cuckoo, deceived  by his reflection ,  flies  into  the window and dies instantly; a flock of birds collides with my car, the cats bring small mice as gifts, small bones,  feathers, and skin, all indispensable  for the growth of a wild, nocturnal,  bird of prey. 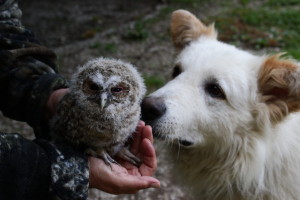 During the first week she keeps me company in the office.   She is very sociable with the other inhabitants of the house. Dafne often looks for her, Rascal watches her for hours at a time ,  with his head resting on his paws  The cats, however, are  banished from the area because Morgan, a few years ago, succeeded in opening/ that cage all by himself and  preying y on a small, wounded  jay.  After a few days she begins to recover, eating calves’ liver, chicken hearts and a pigeon that I have prepared  in portions  and put in the freezer for her…all dressed with tiny, chopped up bones, feathers, the skin of small rodents, and all those rejects indispensable for assembling the wrapping…and for  keeping her in good health.

If I think about this calmly,/rationally, I’m a bit disgusted at having to tear to pieces, chop up, and warm up only with my fingers, these little corpses barely dead, to push and hide  deep inside each mouthful, the blunt bones and  feathers that are important  also for giving  her calcium, so essential to  growth for a creature of her size.After a while, my perceptions alter and I change into the Mother  Owl who would have done her  best to bring up her little ones had the nest not been destroyed and the other chick killed. Everything becomes more natural.We begin to understand each other better…or at least In think so. 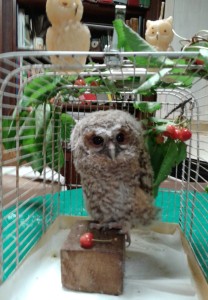 So I decide that it is time to “Minervise”  my kitchen somewhat   to make it more suitable for her first flights.  Everything gets covered with washable/oil/ cloths, ornaments and human food are hidden away  inside cupboards and the cage is left open at night.  This does not work well however, as the following morning I find the little one hiding behind a chair, on the floor with her head tucked into  a corner. She obviously needs more food and a few  more days…

But if you have decided to take care of this little nocturnal hunter,  you must have realized that you need to give her your full attention  and to be ready to seize the right moment.She gets fed at least three times a day, /nestling into her little olive branch and  observing with curiosity my every move. In the mornings she likes to eat at dawn when she is awake and alert, and my self-denial, in those early days,   drove me  to strip  the whole kitchen of fibrous bits and pieces,  to prepare her meal then put her to bed. Time later to think of coffee and breakfast.

Now I am the first one to breakfast whilst she looks on  intrigued, and listens to the radio,  making cooing noises.  She produces an infinite range of  strange rhymes and pulls all sorts of amusing faces. She has glabrous eyelidss,  made up with violet eyeshadow, that she continually  raises and lowers  in turn, as though she were winking and a third eye ,as thin as a veil, that every now and then c,louds her glance.  I do not believe that I will manage to understand all her language before setting her free into the park once she reaches adulthood!

I’m also thing of setting up  a nesting place for her, at least in the   early days, since, compared with the short-eared owl,  she seems to me to be a real lazybones.  Even eating takes her ages. She gets distracted, takes her claw with her beak instead of the food, just for the fun of doing so  and “nibbles” at it delicately.  Often it is only a question of waiting for her to finish the preceding piece, when she stretches, or twists her head around 180 degress to groom her feathers. Difficult for me to realize when she’s had enough until she actually spits out her food and lowers her head to be caressed a bit.

The dogs at my feet, at that stage, are more than ready to scoop up any morsels she rejects. I read somewhere that nocturnal birds of prey  enjoy bathing so I left  a basin of lukewarm water in the sink  but so far  she has not availed herselfof it.

In the same way I discovered that they rarely drink water since they produce it directly from the meat that they eat. 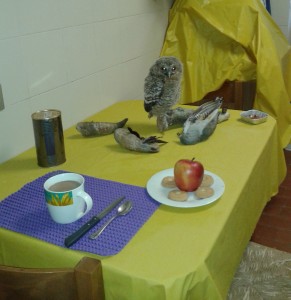 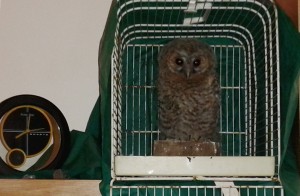 The 2 0’clock meal I more difficult because Minerva lies, like a beached whale, in her den and is fast asleep.  Maybe in the next few days, I wull cut out this meal  but for now she seems to need it so I do not feel I can. However, my ancestral instinct  tells me to shift the nest onto  the window sill and to hide it better. In this case I did well since at night time she likes to look out.  She is as curious as a gossip! 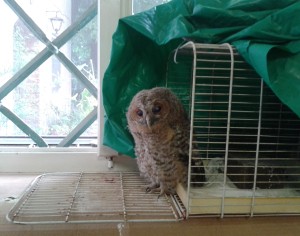 A nest closed to the window

The other evening two huge surprises shook up our daily routine of life. Before midnight Clodoveo  came to visit me and, concealed in the lime tree, announced his presence with his usual very shrill, and rowdy calls. I replied with my more raucous voice and Rascal, on his lead. looked  me as though  I had gone  mad. On arrival in my kitchen I look for Minerva, who has vanished.  After searching  for her  everywhere I ask for help,  fearing an underhand feline  attack.  Fortunately,  Marco, climbing onto a chair, discovered her asleep on the highest kitchen  shelf.   Her first flight successfully achieved!

I will update this blog as and when I can to keep you informed but, please, could you also tell me of  your experiences with fledgelings.